As part of Lehigh’s health and safety plan, the university is requiring that individuals undergo COVID-19 testing. Lehigh contracted with Vault Health to handle our surveillance testing program.

Following our pre-arrival and arrival testing plan where all students were tested for the first three weeks, most students (~100%) will be tested at least once every two weeks. This percentage is increased when there are higher positivity rates or when additional testing is necessary to mitigate the spread of the virus. Failure to comply with testing and contact tracing efforts will result in conduct violations.

Faculty and staff with a high level of engagement on campus will also be provided with regular testing.

The cost of required surveillance testing is covered by the University and students will not be charged. 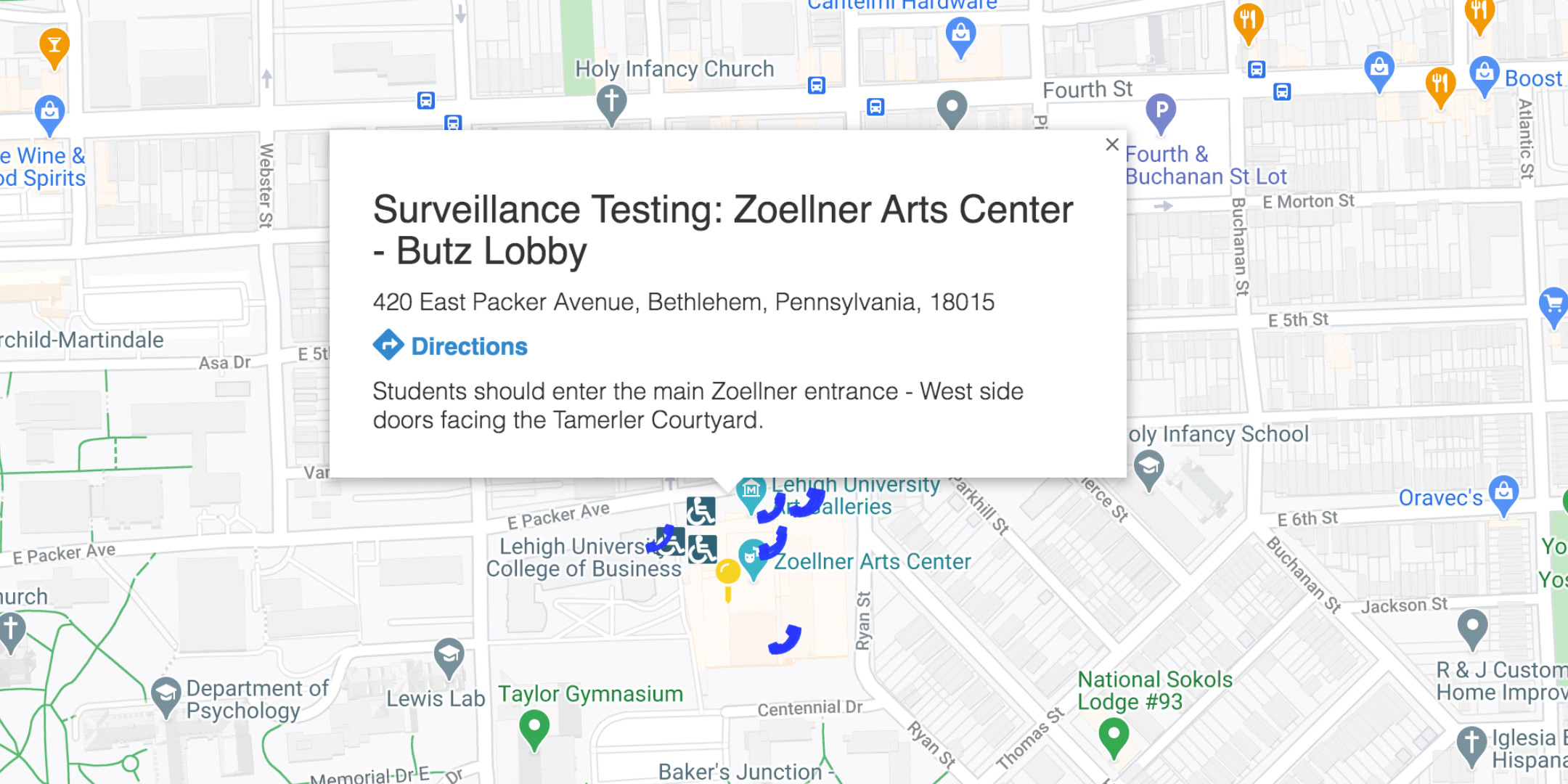 No. Vault’s SARS-CoV-2 test will only be performed in the laboratory after (1) a licensed test supervisor orders the test for an individual and (2) the sample collection is observed by a test supervisor (via Zoom-enabled video supervised testing for those taking the at-home test, and in person for those taking the test on campus). Once the sample has been received by and tested in the laboratory, the individual will receive results via electronic reporting.

If saliva is not collected under supervision from a test supervisor, the test results will be invalidated.

For positive results, yes. Students should upload a copy of the report of their POSITIVE test results on the Health and Wellness Center patient portal. Faculty and staff should follow the process established through Lehigh's occupational health provider. Students should contact the Lehigh Health and Wellness Center at 610-758-3870 for additional guidance about isolation and next steps to be cleared for arrival. It is likely that individuals will also hear from their local public health entity.

For negative results, no. You do not need to upload your negative test results. Remember that the results only indicate that the coronavirus was not detected on the day you took the test. You must continue to keep vigilant: wear a cloth face covering, maintain proper social distancing, wash your hands frequently, self-monitor symptoms (complete the self-screening tool if coming to campus) and absolutely stay-at-home if you don’t feel well or have other symptoms.

This RT-qPCR test is very sensitive for the presence of SARS-CoV-2, with 98% of tests providing either a positive or a negative result, and only 2% of tests providing an inconclusive result. The test can detect fewer than 10 copies of viral genes per milliliter of saliva, and can detect the presence of virus in the saliva within 2 days of infection and up to 28 days after infection.   Across all known gene sequences of SARS-CoV-2, the test detects the ones in the genes of interest ~100% of the time, making it highly sensitive and specific for those genes.

This RT-qPCR test detects specific genes from the SARS-CoV-2 virus, which is the virus that causes COVID-19. After individuals provide a sample of their saliva, the virus's genetic material is extracted from it and these specific genes are looked for in a laboratory.  If they are present, the test is considered positive.

Sample collection teams will staff specified locations on campus with proper social distancing and health protocols in place. Students should hold to their scheduled appointment to help minimize the number of students accessing the testing site at the same time. A Lehigh staff member will be on-site to ensure social distancing and check to make sure that you have an appointment before allowing you to take your test. Please have your Lehigh ID available at all times. After completing your test, you should immediately leave the area and avoid congregating in groups. Social distancing and the wearing of face coverings are required at all times.

Ventilation is enhanced in our indoor testing center. The Zoellner lobby has 8.5 air changes per hour (ACH). CDC and ASHRAE (the building industry standards group for HVAC) recommend 6 ACH for health spaces. We are supplementing the built-in capacity through the addition of air purifiers, which increase the air changes per hour to at least 10.

All students, faculty and staff have the option of ordering a COVID-19 test directly from Vault Health. However, Lehigh will only be supporting the costs of tests for those who are required to be tested. The cost for ordering an individual test is $150. If you are paying for your own test, please note that the university will not receive your results. Students must contact the Health and Wellness Center if you receive a positive result.

Students who must travel out of the area should follow the travel/return to campus protocol.

Individuals can be exempt from testing for 90 days after a positive PCR test. If you have had a PCR test that documents COVID-19, you can provide the test result to the Health and Wellness Center via the HWC portal and send a secure message to the HWC via the portal to be exempted from testing. If your only documentation of COVID is an antibody test, you must still take a surveillance test.

This RT-qPCR test is very sensitive for the presence of SARS-CoV-2, with 98% of tests providing either a positive or a negative result, and only 2% of tests providing an inconclusive result. The test can detect fewer than 10 copies of viral genes per milliliter of saliva, and can detect the presence of virus in the saliva within 2 days of infection and up to 28 days after infection.  Across all known gene sequences of SARS-CoV-2, the test detects the ones in the genes of interest ~100% of the time, making it highly sensitive and specific for those genes. The false positive and false negative rates for this are both 1%. A ‘false positive’ is a result that is positive that actually should have been negative, and a “false negative” is a negative result that should have been positive. With a false positive and negative rate of 1%, this means that 99% of the time, a positive or negative result is the actual result after just a single test. To put this in context, a lot of COVID-19 tests have a low false positive rate, but the false negative rates of some nasopharyngeal swab-based tests can be as high as 25-35%.

Yes. Students who are identified as being required to take these tests are not required to pay. The costs will be covered by the university.

Yes. This assay is intended for use under the Food and Drug Administration’s Emergency Use Authorization #200090 authorized on April 10, 2020. This is the only saliva test and saliva collection device that is FDA-authorized for at-home self-collection in the U.S. at this time.

If you receive a positive test result, you should immediately isolate in your residence. The Health and Wellness Center will follow up with you. If you received your results after 5:00 p.m. or when the HWC is closed, you will receive a follow-up the next day. You may also call the HWC's main number 610-758-3870 to get in touch with the clinician-on-call. When you call this line after hours, please provide your name and phone number to receive a call back from the clinician-on-call. This will put you in touch with a registered nurse, nurse practitioner, or physician who works at the Health & Wellness Center.

Review our isolation and quarantine protocol for instructions about what to expect should you test positive as an on-campus or off-campus student.

Students living on campus are relocated to on-campus isolation housing and provided with meals for the duration of the isolation period. A recommended list of what to pack is included at the bottom of this page under “Additional Resources.” Students living off campus are required to self-isolate in their off-campus residence. In limited cases, the HWC may arrange for a student living off campus to isolate in on-campus housing. All students who test positive are contacted by the Bethlehem Health Bureau, who manages contact tracing and notification and follows up with the student, along with the HWC, through recovery.

Vault can usually guarantee results in two to three days (if the saliva sample is provided as soon as the kit is received and the sample is shipped back immediately).

This is because individuals who have tested positive may continue to have positive viral tests (antigen or PCR tests, including the VAULT saliva tests) for up to 90 days after infection. These students should continue wearing a mask and social distancing. And after this period, people should not consider themselves “immune” or unable to transmit the virus, as there is clear evidence that people can be reinfected with COVID-19. Some information on this is included below.

The new variants are still being studied, but a recent study points to more concerning evidence that new variants may be even more contagious re: reinfection as well: https://www.thelancet.com/journals/lancet/article/PIIS0140-6736(21)00183-5/fulltext#articleInformation

How long "immunity" lasts is still being studied: https://www.sciencemag.org/news/2020/11/more-people-are-getting-covid-19-twice-suggesting-immunity-wanes-quickly-some

No, this is not a test for COVID-19 antibodies, which are produced by those who have had the disease and have recovered.

Yes. At this point, Lehigh is continuing to require surveillance testing and continued protocols such as mask-wearing and social distancing for vaccinated community members. The reason for this is that the vaccine is not guaranteed to be 100% effective and even if the vaccine prevents someone from experiencing symptoms, they may still be able to serve as a carrier of the virus. As more data is available on testing from people who have been vaccinated, this guidance may be amended and any changes will be communicated. As of now, students who have been vaccinated should still complete any required surveillance testing. Students, faculty and staff who have been vaccinated but develop COVID-related symptoms should still be medically evaluated and tested.

It depends on how long ago you tested positive for COVID-19. Current guidance from the CDC and PA Department of Health is that a person is presumed to have immunity for 90 days following a positive viral COVID test (antigen or PCR).  During that 90 day period of time, if someone has been a close contact with a person with COVID, they do not need to quarantine.  After that 90 days, they need to quarantine if they have had close contact with a case and resume participating in required surveillance testing.

This guidance is independent of any antibody testing that may be done.  Although this will likely evolve, currently per CDC: "Serologic testing should not be used to determine immune status in individuals until the presence, durability, and duration of immunity are established."

In addition the CDC says the following, which is applicable to the university setting:

Have a suggestion or question?

Our success in returning to our vibrant on-campus experience will take the efforts of all of us, individually and collectively. We welcome your questions, ideas and suggestions.